As many businesses have moved to remote work, collaboration tools have been more important than ever.  Two of the biggest players in the collaboration space are Microsoft Teams and Slack, but its difficult for many businesses to decide which one is right for them.  In the video below, I go over the difference between the two tools, and my recommendation on which businesses can benefit most from which software.

Hi, I’m Brian Mackenzie with TrustRadius, and in this video I’m going to compare two giants in the collaboration tools space, Microsoft Teams and Slack.  I’ll go over the key features of each, and help you decide which tool is best for your business. I use Slack in my current position, and have used Teams in previous roles, as a result, I’ll be using footage from an active instance of Slack, and I’ll use a test organization for the Teams footage.

Slack and Teams are both collaboration tools, but there are a few key differences in what they offer before digging into the details.  Both are known for their chat and video conferencing features, but it’s worth noting that almost every Teams pricing tier also includes Microsoft Office software such as Word, Excel, and PowerPoint.  There’s no comparable features in any Slack’s offerings, so if you are looking to pick up an office software suite and collaboration tool in one purchase, Teams is uniquely positioned to meet your needs.

For businesses just looking for a collaboration tool with chat and video conferencing features, however, Slack and Teams are very competitive with each other.

First, there are a lot of similarities between the two, even down to the user interface.  In Teams, you can see activity relevant to you in the activity tab, which includes anytime you were mentioned or someone replied to you. From chats you can message anyone in your organization, or invite contacts to send messages to. The best feature of Microsoft Teams, though, is it’s namesake, teams!  This feature lets you create subgroups of your organization that you can easily chat and share files with. You can even create multiple channels in each team in case the team needs further organization.  You can also make a wiki for your team where you can include important information that needs to be accessible quickly.  Lastly, the files tab lets you easily share files with other members of the Team.

The biggest strength of the Teams functionality is organization.  You can set up a team where it’s easy to find the information you need regardless of topic.  On the flipside, it’s also easy to create so many teams and channels that it becomes difficult to find anything, so to get the most out of Teams you have to find the sweet spot between too many channels and not enough.

Slack’s interface is similar.  On the left side of the app you have all the channels you are part of. Each channel is highlighted if it has unread messages for you, and a red exclamation mark will show up if you’ve been mentioned in any of the channels.  You can also check in on any threads you’ve commented on using the threads button.

Slack doesn’t have teams functionality, though you can create group messages by adding multiple people to a private message.  For the most part though, channels are where you do most of your chatting on Slack. This means most organizations will have many channels available for you.  You can join a new channel by searching for them yourself, or automatically if someone mentions you in a channel you aren’t in.  While there’s no designated area for file sharing, you can share files in any channel or message, and can search by file if you are looking for something someone shared in the past. The lack of a teams functionality can make Slack slightly less organized, but it can also help avoid siloing since people can check in on channels they aren’t a part of as long as it isn’t a private channel.  Users can also help keep their Slack app organized by removing channels that they don’t use often.  This structure makes it so that even if your organization has a lot of Slack channels, it isn’t overwhelming for the end user.  Our Slack instance has over 500 channels, for example, but I’m only a member of about 30, so I’m never buried in Slack channels.

Between the two, Slack’s interface is easiest to use.  You might have to teach someone how to join a channel, but beyond that it is intuitive, it’s easy to see when you’ve been mentioned, and what channels need your attention.

Teams isn’t hard to use, but the teams structure makes it a little more complex than just having a list of all your channels on the left side of your screen.  That said, the teams feature allows for more organization and subdivision compared to Slack, so if you need to be involved in a lot of channels, it can be more manageable.  All in all, Slack has the better interface if users will not need a large amount of subdivided communication channels, but Teams is more capable of handling complex channel infrastructures.

Both Teams and Slack also include web conferencing features.  Using Teams I can call users from my teams, or from my contacts.  One nice feature that is unique to Teams is that I can set contacts by phone number, and call them that way if they aren’t near their computer, or don’t want to use Teams.

Slack only lets you call people who you are in Slack organization with, though the interface is very simple: you just click on their name, and then press call in the top right corner. Both tools support video and audio functionality. Notably, for users that don’t want to use Slack’s video conferencing tools, it has built in support for other conferencing tools such as Zoom, Cisco Webex Meetings, and even Microsoft Teams.

Slack has a few notable limitations when it comes to video calling that aren’t present in Teams web conferencing offering. First, web conferencing isn’t included in Slack’s free offering, and it’s only accessible through the desktop version of the application. It also has a meeting cap of 25 people. Teams supports conferencing for at least 300 people, and allows calling from the mobile app in all of their plans including the free one.

When it comes to video calling, Microsoft Teams is built from Skype, giving them an edge in that their tool has been in development for a long time.  As a result, it sports more consistent video quality in smaller calls, and can support a much larger number of participants.  If you want your chat tool to also be your web conferencing tool, Teams is a better choice.  Slack’s web conferencing features should be seen as a small bonus for internal communication, not a replacement for a dedicated web conferencing tool.

Both Teams and Slack include a number of integrations to make other software work with your collaboration tool, as well as bots to automate tasks from managing channels, to previewing links.

In contrast, Slack boasts a huge variety of third party integrations, from G Suite to third party cloud storage. Many enterprise apps build their own, well supported integrations with slack, while third parties can also create Slack apps such as bots to handle tasks like in chat polling.

When it comes to integrations, the choice between Teams and Slack should be clear. If you are using primarily Microsoft Software, Team’s built in support for Microsoft software makes it an easy choice, you won’t need many additional integrations, you can just install Teams and be ready to go. For businesses that need more third party integrations, Slack provides a much wider variety of well supported integrations.  This can make it more difficult to set up, but you can fit it into almost any IT infrastructure.

Slack and Teams both offer a variety of different price points that are appropriate for businesses of different sizes.

Only Teams offers a forever free version, which supports video conferencing and chatting features.  The footage for this video was all collected from the free version of Teams, so you can see that it includes all the essential features of the application.  Slack, however, does offer free trials upon request from the vendor. These trials generally last a number of messages, which depending on the size of your business, could last you awhile.

The rest of the Teams pricing packages range from $5.00 per user per month, to $20.00 per user per month.  It’s worth noting, though, that every tier above the free tier is nearly identical in terms of Teams functionality.  The only difference is that the $20.00 per user per month plan supports up to 500,000 users vs the 300 users supported by the cheaper plans. The reason the plans are priced differently is that the more expensive plans include other Microsoft products.  If you just want Teams as a collaboration tool, the $5.00 tier is probably the best one for you.  Also, if you already have several Microsoft products, you may already have Teams included with them.  If this is the case you won’t have to pay any extra for the collaboration tool. One notable limitation is that 300 user maximum on all tiers except the most expensive.  If you have more than 300 users, but don’t want the Microsoft Products included in the $20.00 tier, Slack may be a better option.  All Microsoft Teams plans also require an annual commitment.

Slack offers 3 pricing plans, which are discounted if you commit annually.  I’ll be using the annual prices as my comparison point since all Teams subscriptions are annual commitments. The standard tier costs $6.67 per user per month and includes all of the features I’ve mentioned, so that’s chatting, file sharing, and video conferencing.  This is the tier I’ve been collecting footage from. The difference between this tier and the higher tiers Slack offers are largely management and data security features.  Higher tiers can adjust posting permissions for users, integrate data loss prevention tools, and add single sign on.

When it comes to pricing, Microsoft Teams is the cheaper option, even taking into account Slack’s annual pricing discount. If you are on a budget, you can’t beat the free version of Teams, or that it’s feature complete at the $5.00 per month tier.  Businesses with over 300 users, however, are forced to use the most expensive pricing package with Teams, so Slack can be a more affordable option for organizations of that size.

So we’ve gone over interfaces, features, and pricing, but which is better, Teams or Slack?  I think the answer to that largely depends on how you feel about Microsoft Products.

If you want a little more flexibility with your other software, or user third party tools like G Suite and DropBox, Slack offers the wider variety of integrations that are often better supported, albeit at a higher price point. Slack also provides an easier to use interface, which can save time on training and increase adoption if you are changing from another collaboration tool.

If you’re still on the fence, check out some verified user reviews of each software at TrustRadius.com, or at the link in the description.  If you want to see more videos like this one, consider liking or subscribing. 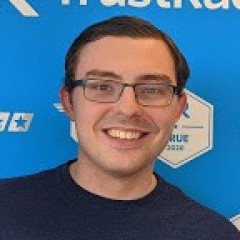 Brian is a Technical Research Specialist at TrustRadius, focusing on product development and data driven technologies. He aims to help buyers make excellent purchasing decisions that meet the needs of their business. Brian has a BS in information science from the University of South Carolina.

20 posts by this author