As we discussed in our Buyer’s Guide to Social Media Management and blog post, “Social Media Management in Large Enterprises”, many large enterprises have unique needs including the ability to manage cross-functional coordination. Sprinklr and several of its competitors are adding capabilities historically offered by point solutions either organically or via acquisition.

With their funding, Sprinklr announced the launch of a paid media platform, to help companies deploy and measure the performance of paid media ads. This product is designed to compete with solutions like Kenshoo. This announcement follows on the heels of their acquisition of the Dachis Group on February 19th, which brought product capabilities for brand analytics, social governance, employee advocacy and content optimization, as well as an expanded strategy and services team.

On April 2nd, Spredfast announced a merger with social curation platform Mass Relevance. The Mass Relevance product has been rebranded “Spredfast Experiences” and is designed to source and filter content from major social networks, build social experiences with visualizations and publish across websites, mobile, TV, retail and outdoor displays.

On January 22nd, Hootsuite announced the acquisition of Ubervu, a social analytics platform. It has initially been introduced via the Hootsuite app directory.

A key question with all of these acquisitions will be whether the level of integration achieved meets customer expectations.

In an interview we conducted with Jeremy Epstein, VP of Marketing at Sprinklr we learned that the funds raised will be used for continued product investment, expanded sales and marketing and growing their client success teams and ecosystem of partnerships with consulting firms like Accenture and Deloitte.“We grew 400% in 2013 and are projecting to grow 300% in 2014. We believe that the market is validating us.”

They believe their market is far from saturated. “Today we work with about 500 enterprise brands including 4 of the top 5 U.S. banks and some of the biggest players in CPG. We think there’s a universe of 5,000 prospective clients”.

Like their competitors, they are expanding internationally. They opened a UK office in August 2013, are opening up in France and ultimately have plans for Germany.

Sprinklr expects to see a new line of revenue emerge through their new Paid Media product and expects to take share from incumbent vendors like Kenshoo. “Today, people are using point tools or no tools for paid media management. We see it as a large opportunity. Brands are telling us they want it integrated with the rest of their social media suite.”

Historically, new products have been strong drivers of growth, and Sprinklr has competed primarily on the basis of its integrated platform. Starting from social publishing and engagement, Sprinklr has added capabilities like Listening to its suite over time. “We introduced Listening back in Q3/Q4. In Q1, 25% of revenue came from listening. We are taking share from Attensity, Radian6 etc., as customers want an integrated experience.”

As one Sprinklr reviewer on TrustRadius stated “While the tool is probably not best-in-class in any one area, its broad set of capabilities from listening / monitoring to publishing and analytics all work very well.”

In early reviews on TrustRadius, we saw a number of users critique the Sprinklr user interface (UI).  This critique has been mostly absent from recent reviews and replaced by more positive comments. Per Jeremy Epstein, “We have made a lot of progress on the UI and have had good feedback. Our goal now is to take it to the next level for roles, permissions and different roles in the enterprise – for 20k people deployments.”

Sprinklr expects to have completed work on the Dachis Group integration in a month. Per Jeremy Epstein, VP Marketing, “Everything will be running off the same code and data storage. There will be one unified experience. We were fortunate that Dachis built their products in a similar way to us.” Dachis Group founder and CEO Jeff Dachis is now working as an advisor to Sprinklr but is not involved full time. 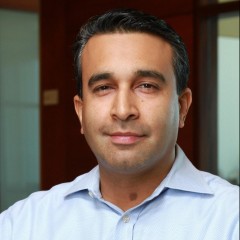 Vinay Bhagat, founder and CEO of TrustRadius, is an entrepreneur passionate about tackling big problems. Vinay conceived TrustRadius after experiencing challenges when buying enterprise solutions at his last company. In 1999, Vinay founded Convio, the leading Software as a Services platform for nonprofits. In April 2010, Convio became a public company, and was acquired in May 2012 for $325 million. Prior to Convio, Vinay was at Trilogy Software and Bain & Company. He holds an MBA from Harvard Business School where he graduated as a Baker Scholar, an MS Engineering Economic Systems from Stanford University, and a MA Engineering Information Sciences from Cambridge University with First Class Honors. When he’s not working, Vinay loves spending time with his family, playing squash and racing cars.

37 posts by this author