Leaving a video review helps other professionals like you evaluate products. Be the first one in your network to record a review of Adobe Marketo Engage, and make your voice heard!

What is Adobe Marketo Engage?

Would you like us to let the vendor know that you want pricing?

What is HubSpot Marketing Hub?

Adobe Marketo Engage, from Adobe since 2018, aims to help marketing teams drive demand and growth in their companies by delivering exceptional experiences in concert with sales at every stage of the customer journey.
The challenge these teams face is that everyone today expects a personalized experience whenever they interact with a company - they don’t have patience for generic marketing and the last thing they want is a cold call from sales. So to stay competitive, marketing teams are scrambling to understand customers better, so they can give them a better experience, because this is disrupting entire industries. And a big part of what’s needed is figuring out how marketing and sales can do a better job together.
The vendor states Adobe Marketo Engage redefines Marketing Automation by helping these companies bring together the customer data, content, automation and analytics needed for marketing and sales to coordinate engagement with customers that’s personalized and measurable at every touchpoint - and do it with efficiency and scale. 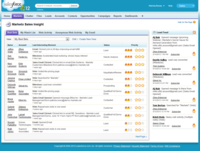 About TrustRadius ScoringScore 8.6 out of 100
Compare

About TrustRadius ScoringScore 7.7 out of 100
Compare

About TrustRadius ScoringScore 7.9 out of 100
Compare

About TrustRadius ScoringScore 8.2 out of 100
Compare

About TrustRadius ScoringScore 8.2 out of 100
Compare

About TrustRadius ScoringScore 8.4 out of 100
Compare

About TrustRadius ScoringScore 7.7 out of 100
Compare

9.1
91%
Companies can't remove reviews or game the system. Here's why

When integrating our CRM, SugarCRM, we ran into multiple issues. The issues were on Sugar's side, but Marketo was willing to go above in beyond in helping me find a solution and reach a resolution. Their help literally changed how we did the integration and was a huge

I needed a password reset, and they responded in a timely fashion.

A support engineer from Marketo was once incredibly diligent about a difficult issue, and it was really appreciated. He actually emailed me every single day to let me know the latest update, even if there really wasn't an update at all. He always made sure that myself and my organization were not forgotten about as we worked through the issue. It was very appreciated an an excellent example of customer service.

I would if I could

Sadly, I have never experienced exceptional support from Marketo.

There have been time mostly, but they never consult when it comes to intergation processes.

There was one time we were trying to figure out how to change the visibility around a web activity report. The support team informed us that what we were trying to do was not possible at this time. They said they liked the idea, though, and told us to put it up on the Marketo community. As soon as we did, the support team backed the idea. It hasn't been implemented yet, but it was nice to know that they do listen and support what their customers are trying to do.

Had an issue where unsubscribes were not working properly. The technician signed on to my account and looked at the configurations to recommend a solution.

I can't say I can name a specific instance, but in general I think Marketo Support has been great over the past few years in my experiences. They have been great at diagnosing issues as well as helping us decide on what is the best way to set up programs and other aspects of Marketo.

I have asked for help and when Support was unable to answer they immediately escalated to the Engineering team to help get an answer/fix.

When we first purchased Marketo, we had exceptional service! Quick to reply and service us, but since then it's been radio silence!

I have had support people quickly answer obscure questions I've had very specific but not obvious questions and they get the answer I need. I'm impressed how even if they don't know the answer right away they figure it out.

Yes- once, Marketo Support was EXTREMELY helpful once with a sync issue we were having with Marketo and Salesforce. We had data we were constantly loosing, and they went above and beyond to help us resolve it, looking over debug logs and helping us find the issue in some rogue APEX triggers. They stuck with it and helped us keep reviewing until we made it stop. It was great!

The support team overall is really knowledgable. However, sometimes they just send you to docs.

They helped me to get to the bottom of why a campaign was not triggering when leads were qualifying for it. It turned out to be a bug - they helped walk me through this and get it resolved.

I have many experiences with Marketo support team. In one of the case, I was looking for SFDC campaign ID which were used in Marketo program but there is no such search process in Marketo which provides this information directly. Marketo supports teams always helps me in such scenario. Also, in one of the case, we required to create special RE report and we weren't have all the correct cost criteria setup. Marketo supports me helped me to create the same scenario in local sandbox and even created the sample demo report for us.

The only time I feel like Marketo provides support is in-person at various roadshows, but that is often to try and get you to try and drink the kool aid from Marketo. I really feel this is an area they need to improve upon. They've built a great community as the support system, which works for their bottom line, but not mine.

Some of their "community" people respond quickly; but that doesn't mean the issues are fixed quickly.

Chris Johnson is an exceptional support representative. He is very knowledgable and timely in his responses.

In the beginning of our integration with Marketo and Salesforce we had a bug happen in our lead library. Marketo was duplicating the Salesforce leads and contacts into two different lists. I was actually unaware of the issue and my Marketo representative reached out to me. We immediately took the issue to support and our situation was resolved in a matter of two days. The end result found that we accidentally uploaded the list twice into Marketo which created our own bug. Thanks to Marketo we were able to find the solution quickly and ensure our database was clean prior to implementing nurture streams.

When we had a large batch of leads stuck in Marketo-SFDC pipe, support worked with me to investigate the issue for quite some time. They provided us support to open more 'pipes' so that the integration slowness gets resolved and so on.

Patricia Lughezzani provided excellent support trouble shooting a redirect thank you page that wasn't working properly. She checked our website code and determined our IT had hard coded a thank you page URL that was no longer valid and it wasn't the marketo form redirect at all.