Leaving a video review helps other professionals like you evaluate products. Be the first one in your network to record a review of Veeam Backup & Replication, and make your voice heard!

On Premise
per year

For the latest information on pricing, visithttps://www.veeam.com/salesinc.html 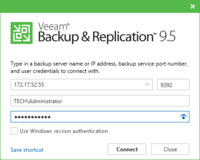 Join Veeam SE for an in-depth technical deep dive into the architecture and engineering of Veeam Backup & Replication. Learn how to protect your virtual workloads with Veeam Availability Suite by diving into the deployment and technical details of components that allow Veeam B...
Show More

About TrustRadius ScoringScore 9.9 out of 100
Compare

About TrustRadius ScoringScore 8.1 out of 100
Compare

About TrustRadius ScoringScore 6.5 out of 100
Compare

About TrustRadius ScoringScore 7.6 out of 100
Compare

About TrustRadius ScoringScore 9.2 out of 100
Compare

About TrustRadius ScoringScore 8.9 out of 100
Compare

About TrustRadius ScoringScore 7.1 out of 100
Compare

About TrustRadius ScoringScore 8.3 out of 100
Compare

8.1
81%
Companies can't remove reviews or game the system. Here's why

the key that drove us to look at Veeam backup & Replication was the immutable backups and automatic testing of our backups. Once we dove into the automatic testing we found it really was a perfect fit for our environment and needs. The customizations were exactly what we needed for our customer base.

This question is not applicable. We have neither deployed nor removed Veeam from any client, but have simply inherited the environment from others. In a previous position, Veeam was the standard for our company, and therefore I was required to use it and learned that it can be quite helpful for the right situations.

Existing backup software is too complicated and licensing is very expensive. Their dependent media needs to purchase which incur cost. With Veeam Backup & Replication, all those are eliminated.

In our company, we had an incident in the past where the company did not have an IT employee, and it was without a robust and functional backup solution operating in the network environment. There was an internal situation where the company lost almost all of the network and its files. After this incident, I was hired by the company for the IT area and to restructure the entire IT environment. The incident made it possible to acquire the necessary datastore equipment, and the implementation of Veeam Backup & Replication as a backup solution for Hyper-V VMs was carried out, as I already knew the tool and its agility in the backup and restoration of VMs.

We were migrating from older servers and no longer needed our old backup solution as it was dated software. With the new servers, we could now run more modern tech to assist us in our day-to-day operations. Our experience with our old software was also a tiny bit finicky and had minor bugs but basically, once it was installed, it ran without issue. Occasionally, you'd need to put the license back in it as it would lose the license file sometimes but other than that, it was pretty flawless. This one has been quite the opposite.

Our prior backup approach was an appliance-based approach from Barracuda. The appliance had a fixed amount of storage that couldn't be upgraded, so once we hit the storage limit, it was time to make a purchase.

We were using Windows Server Backup before Veeam Backup & Replication and even a lot of our virtual machines weren't even made backups off in any way. This has become that way since the previous person managing the servers wasn't a full system administrator but a developer doing system maintenance on the side when needed. When I started my System Administrator job after a while of getting to know the environment and what the servers were being used for, we started to look for a good backup software provider. I had experience with Veeam from other jobs and we started a trial with Veeam. The results were promising and we bought a license for Veeam. Until this day we are still using Veeam and aren't looking or thinking about switching to other software any time soon.

In one project, we used the standard snapshot function of the virtual system and maintained the system with user-defined scripts, but we had a problem with disk size and lost all backup. This problem costs us approximately 3 months to install all software and system. Also, we had a problem with customer satisfaction afterward, we decided to have trustable software, and I had experience with Veeam Backup & Replication, so we decided to buy it.

There were several issues with the SaaS backup solution we were using that caused us to evaluate other solutions, including Veeam. Overall there was a QoS issue that was preventing several of our virtualization platforms from completing backups. There were also cost issues where the cost of the SaaS option had increased over 300% in a matter of months, even though usage had not increased.

We used to use a couple of other solutions prior to veeam, these were direct to server or tape backups, they were clunky, slow and difficult to manage and took a lot of time to manage<br><br>Under Veeam the process is automated, the feature set has improved significantly over each version without additional costs<br><br>Experience before and after is night and day, Veeam has made backups managable and controllable

Our previous vendor was not able to achieve the target recovery time we needed. They had stated it would be impossible to achieve a daily backup for a particularly old production server, and that twice-weekly would be the utmost that could be done. In addition, they failed to monitor their backup jobs' success or failure, and when a critical failure happened, two months' worth of transactional data was lost as a result. We cut off the $12,000/yr we were spending with them, and implemented Veeam at a much lower rate, taking the onus of backup and replication in the house to ensure it is performed correctly. A similar critical failure occurred post-implementation, not only was no data lost, the recovery time was under 15 minutes to go from a physical host to a virtual machine. I have that same production server on an hourly backup job and it has been validated numerous times without error. We went from a nightmare vendor to a perfect use case.

The IT department for our company and the managed service provider that we contract, both had been working towards a new backup system to replace the outdated and troublesome backup system that had been in place for years and was slowly degrading. The push to move to Veeam was a decision based on the prevalence of ransomware attacks and our need for a newer, more versatile backup system.

I started working with this company recently. My predecessor was doing manual backups with robocopy jobs to NAS units. I was the trigger for changing.

Honestly, we had a lot of issues with our previous backup system. The lack of trust in our current backup system caused me to make the change and utilize Veeam as a secondary backup tool.

The incumbent application was slow, difficult to administer, expensive, badly specified, and didn't give me the confidence I knew Veeam would.

Needing a quality backup solution for the workstations.

We rebuilt the main production environment and needed a robust backup solution to replace the existing poor systems in place. The previous Microsoft backup was poor and unreliable. Veeam in comparison is robust, quick and reliable compared to the previous solution.

Lack/No support in a timely manner with Backup Exec, system was down for weeks. No company can stay with a product that is not updated timely and has no support.

Veeam Backup & Replication is better than other solutions because I don't have too much work to do to get my data protection. I don't spend too much time configuring my backup jobs.

There was no solution when I arrived on this job, save a few Windows-based full system backups.

In my day job, I work with Veeam Backup & Replication and it has impressed me for years now. From brick and level restores, to full machines. Open source stuff has disappointed me before, so the community edition is perfect and just works!

Veeam is a toolset requirement for any of our clients.