Do you work for this company? Learn how we help vendors

Apache Lucene is a perfect text search implementation where the heap space usage needs to be kept to its minimal. It also enables search based on various search fields and most importantly the search and index process can happen simultaneously. The only scenario where it might be less appropriate would be when the index size grows too big. We have witnessed few scalable issues where the search would take a while when the index size is too large.

Apache Lucene is very good for medium to large datasets that are not searchable as well in MySQL or normal databases. It's extremely fast and robust. Lucene is not as well suited to be used as a strict NoSQL platform.

Apache Lucene offers great full-text search library that makes it easy to add search functionality to a website or other applications. Lucene is ideal if you want low-level access to the indexes and its APIs. For general purposes, Apache Solr, the web application built atop of Lucene can be used instead. Apache Solr comes with caching, HTTP/ JSON APIs and a simple web administration console.

Apache Lucene is an open source search engine library created in Java, available free under the Apache License 2.0. It is associated to Apache Solr, and includes a number of sub-projects, such as Lucene.NET, Apache Tika, and Apache Nutch, now all top level Apache projects.

Lucene supports multiple query types, including phrase queries, wildcard queries, proximity queries, and range queries, and results are ranked so that best results appear first. It is supported by an online community, is usable where resources are limited and is stated by some users to be fairly performant. It enables search of metadata or of data by any field, is integratable with web crawlers, and available for a variety of use cases. And with the PyLucene Python extension for accessing Java Lucene, users can take advantage of Lucene's text indexing and searching capabilities from Python.

Apache Lucene was first made available in 1999, and became part of the Apache Software Foundations’ projects in 2001. It can be used to implement Internet search engines, local single-site search, or search of private resources, as well as other kinds of tools, such as personalization or recommendation engines.

Its crawling and HTML parsing functionality is supplied by optional, ancillary projects, some of these formerly Lucene sub-projects, such as Nutch, and various databases like CrateDB, and Elasticsearch.

Based on research by Schwarzer et al. (2016), Apache Lucene’s MLT function (“MoreLikeThis”) exceeds at providing optimal search results for locating items or articles that are closely related, yet may create linkages to items that are obscure or not as well-known. While it results may be narrow, the authors state a text-based approach can complement alternate (e.g. citation) search methods. 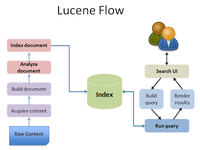 ( Apache Solr Certification Training - https://www.edureka.co/apache-solr-self-paced ) Watch the sample class recording: http://www.edureka.co/apache-solr?utm_source=youtube&utm_medium=referral&utm_campaign=intro-to-lucene Lucene is an extremely rich and powerful full-text search library written in Java. You can use Lucene to provide full-text indexing across both database objects and documents in various formats (Microsoft Office documents, PDF, HTML, text, and so on). The topics covered in the video : 1.What is Lucene 2.Why Indexing 3.Indexing : Flow 4.Lucene : Writing to Index 5.Lucene : Searching in Index 6.Lucene : Inverted Indexing Technique 7.Lucene : Storage Schema Related post: http://www.edureka.co/blog/apache-solr-shedding-some-light/?utm_source=youtube&utm_medium=referral&utm_campaign=intro-to-lucene Edureka is a New Age e-learning platform that provides Instructor-Led Live, Online classes for learners who would prefer a hassle free and self paced learning environment, accessible from any part of the world. The topics related to ‘Introduction to Lucene' have been covered in our course ‘Apache Solr‘. For more information, please write back to us at sales@edureka.co Call us at US: 1800 275 9730 (toll free) or India: +91-8880862004

Apache Lucene is an open source and free text search engine library written in Java. It is a technology suitable for applications that requires full-text search, and is available cross-platform.
Apache Lucene starts at $0.
Apache Solr, Elasticsearch, and Algolia are common alternatives for Apache Lucene.
The most common users of Apache Lucene are from Mid-size Companies and the Computer Software industry.