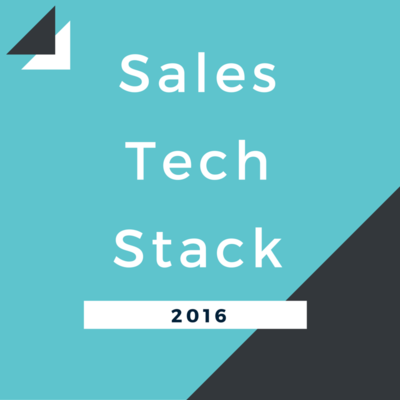 Regarding the state of Sales in 2016, Scott Albro offers this provocative piece of advice: “Companies that figure out how to adopt sales technology and mitigate risk grow a hell of a lot faster than those that don’t.” Albro’s claim—part observation, part promotion—is based on research done by TOPO, a sales process and technology consulting firm where Albro is the CEO. To some extent, this advice is self-serving, since TOPO’s business model involves advising companies about growth strategies that involve technology. However, based on TrustRadius’s independent study of sales tech buyers and users, as well as surveys done by other sales tech experts like Nancy Nardin, many companies are planning to adopt new sales technology this year, whether for the first time or to replace/fill in older ecosystems.

If you’re heading into product evaluations this year, there are a few things you can learn from early adopters. While I was at TOPO’s recent Sales Summit, I talked to practitioners at leading tech companies to find out:

Some companies are investing in sales technology to facilitate certain strategic roles and teams, like sales development representatives. The trend around specialized SDR teams is a tactic for enabling things like account-based marketing and rapid growth. Many believe that technology can help prioritize and accelerate an SDR’s day-to-day tasks, such as background research, emailing, and calling. Automation features can boost a specialized sales organization’s productivity, allowing it to scale revenue efficiently.

“Without a doubt, SDRs are uniquely positioned to take advantage of automation and other benefits of sales technology. For example, we’re using Outreach to automate our account-based sales development (ABSD) campaigns.”

Andrea Hansen, Sales Development Manager at Gainsight, sees new sales tech as “completely changing the game for SDRs, even from how things were a few years ago.” Hansen recently re-designed Gainsight’s SDR program and rolled out a new team over the course of Q1 2016, and she says software was instrumental in making that happen so quickly, and continues to be important as her reps call inbound leads and do outbound prospecting at a high velocity.

“We’re big fans of SalesLoft. We also use LinkedIn Sales Navigator, Owler, and DataFox for intelligence. These tools help us prioritize leads and surface info beyond employee count. My team also uses a Salesforce Chatter group to share best practices.”

Part of the value proposition from some sales technology vendors is that their products can bring different roles and teams together with a consistent, coordinated workflow. This is particularly true of sales content (also called sales enablement) vendors and predictive sales analytics vendors, both of which aim to link Marketing and Sales, in terms of messaging and the lead/opportunity funnel. Based on my conversations with buyers and vendors, stakeholders from both departments tend to be involved in the purchasing decision for products in these categories. Implementation and administration, too, may require input from both sides, since the goal is to align around a new, optimal workflow.

Aside from using tools specifically designed to facilitate interdepartmental workflows, some organizations are initiating alignment by rolling up departments onto a shared tech stack and even having them report to a common executive. For example, it’s becoming more and more prevalent among high-growth SaaS companies, due to the impact of Customer Success on recurring revenue, for Sales and Customer Success to work closely together. (For more information about how this works, read perspectives from Mark Roberge, HubSpot, and David Apple, Typeform, here). According to practitioners, operating with the same tech stack can help these teams centralize information and make handoffs smoother. Richard Dufty, who leads Sales and Customer Success at AppDirect, gave an overview of his strategy for coordinating teams, including the most important tools in their shared stack:

“We’ve split our Sales organization up into new business and customer success, and then on a regional geography basis as well. Customer Success is in charge of our existing customers—helping them drive renewals, upsell, cross-sell, revenue, and adoption amongst their own customers. Sales and Customer Success work hand in hand, and they both report to me. We use HubSpot, Salesforce, ToutApp, and LinkedIn as our main tools.”

For a role and process-based view of sales technology, check out the infographics on p7-8 of the TrustRadius report How to Navigate the Sales Technology Landscape. The report includes in-depth descriptions of who tends to buy, administer, and use certain types of sales tech on a day-to-day basis. It also discusses the impact of trends like specialization and the alignment of Sales and Marketing, in terms of how you should evaluate tools and new developments in sales tech.

Mitigating Risk: The End of the Cowboy Era?

Adoption (or lack thereof) is arguably the biggest risk of implementing new sales technology. As with CRM, it is difficult to get salespeople to use technology that inconveniences them, requiring a change in personal process. Unlike marketers, sales reps are not necessarily interested in a collective team benefit, since they view themselves as independent operators with their own set of deals/relationships. Sales leaders and managers struggle to get individual reps synced up on pipeline management, deal workflow, logging communications, updating contact data, and creating proposals and presentations.

Charles Lawson, VP of Sales at Egnyte, described his sales stack as strong but still maturing. Lawson sees syncing up his team around best practices for using sales technology as an opportunity to get more value in the future.

“We have a lot of sales tools. Our Director of Sales Ops is in charge of coordinating all of those. Some of the products we use are LeanData, Mindtickle, DiscoverOrg, Salesforce, Yesware, and InsightSquared. Are people formally leveraging the tools in the way that we intended them to use them? I think it’s hit or miss by each tool. Right now we’re really focused on sales training, so I’m pretty happy with what we’re doing with MindTickle. I think tools like DiscoverOrg are leveraged pretty well; they’re pretty straightforward. But I think there are other tools like Yesware, where it really depends on the aptitude of the rep. Some reps are using all of the templates in the shared library, and are looking at analytics to see what’s working for their teammates. But we don’t do a training on those types of tools yet, and there different levels of proficiency.”

Egnyte does not necessarily have a grand strategy around getting reps to adopt more features of tools like Yesware yet, but it’s something Lawson says he’d like to see in the future, and it’s something he thinks he himself would be in charge of. Generally, practitioners find that without widespread adoption, it may be difficult to get full ROI from tools that aim to automate or optimize pieces of the sales process across the team. (This is a common value proposition of new sales technologies, including sales email tools and other software for inside sales/SDR teams, especially when vendors are selling to VPs of Sales, Sales Managers, and Sales Ops.)

To combat this obstacle, some vendors sell apps to individual salespeople, as part of a land and expand strategy, hoping that traction at the individual level will lead to more organic widespread adoption, with eventual executive buy-in. These sales are initially transactional: a personal purchase for a single seat of a productivity tool. They’re less expensive, and thus lower friction—both the vendor to sell and for the buyer to justify within their Sales budget. The Sales leaders I talked to described expensing sales apps as common practice, but not best practice, since it leads to a disjointed sales stack across the organization. Doug Landis, VP of Sales Productivity at Box, advises Sales organizations to make more coordinated, strategic sales tech investments as part of their growth initiatives.

“For a while now there’s been a sort of cowboy environment—just buy whatever apps you, the individual salesperson, want and then expense them. Moving forward, sales organizations need to streamline.”

From Early Adopter to Strategic Sales Stack: A Closer Look at Marketo’s Approach to Sales Technology

Jeffrey Serlin, the head of Sales Ops at Marketo, affirmed that the trend towards a centralized sales stack and coordinated adoption is taking place at Marketo, although the initiative is still a work in progress. In general, Marketo has earned a reputation as an early adopter of new tech in the B2B software scene, and the individualistic culture of Sales apps (described by Landis above) has led to an even greater volume of various technology being adopted within Marketo’s Sales organization. Serlin explained how this came to be, and why they’re planning to streamline their use of sales tech across the department:

“You name it, we probably got it at some point and have it on the shelf. Many of those apps we bought from our customers; this was part of our partner strategy. But about two years ago we formed a cross-functional IT-steering committee, with the Director of Sales tools, BI analysts, etc. We mapped out all of the sales software that we have bought over the years and made the decision that we were not going to buy anything anymore just for the sake of it—we were going to rationalize all of this against company needs, even if that means not renewing everything. Especially where there are five tools that all do the same thing—sorry, we’re going to stick with the one we need at Marketo, it can’t just be a customer success investment. We are not nearly done with that overhaul. The punchline is: we have a lot of sales tech, and you may hear from a lot of vendors that Marketo is a customer. But the reality of what we actually use is very small. We’ve had this unmanaged, organic ‘cowboy’ culture, and we’re really putting the kibosh on that. We will not allow anybody to buy something and expense it anymore. But if they find something they believe is useful, we want them to bring it to us and we will purchase it on their behalf.”

So, what does Marketo actually use on a day to day basis? Serlin broke it down into what he sees as the major areas of Marketo’s sales stack, and described the tools they use most often for each of these tasks. (Note that this list is not exhaustive, and does not include all apps still being used by individuals in Marketo Sales.) Some areas, like advanced analytics for Sales, Serlin believes are stalled and not fully mature—reporting/modeling features tailored to Sales could use some additional development, according to Serlin. Other areas, like inside sales software, Serlin sees as highly valuable up-and-comers. “I think ‘Productivity,’ or ‘MOFU’ or ‘SDR Engagement’ or whatever that emerging category will end up being called could be the next big category for Sales tech,” said Serlin.

For more information on other product options, additional categories of sales technology, insight on vendor positioning, and other trends in the sales tech market, read our recent report on How to Navigate the Sales Technology Landscape. If you are interested in other perspectives from Sales leaders, check out our other coverage of the TOPO conference: Use Case Campaigns in Account-based Strategies; Designing an SDR Team to Get the Biggest ROI from Specialization; and What’s in a name? – Account-based Marketing vs. Account-based Everything.

Emily Sue Tomac is Senior Research Manager at TrustRadius, where she studies reviews, the technology buying and selling process, and buyers and vendors themselves. Her research aims to arm people with the tools and information they need to work better, smarter, and easier. She's on a mission to tell their stories, and drive change in how business technology is bought and sold. Prior to joining TrustRadius, Emily Sue worked on research in linguistics and the digital humanities.

57 posts by this author